Yes, you read that right. On International Women’s Day, AFP asked, “Why are there so few male fundraisers?”

Wednesday March 8 was International Women’s Day. The world-wide day recognizing the social, economic, cultural and political achievements of women and calling for acceleration of gender parity. Held every March 8, it’s been celebrated since about 1908.

So, it was with consternation that members of the Association of Fundraising Professionals, especially women, received the monthly AFP eWire with the article, “Why are There so Few Male Fundraisers?” (Hat-tip to Vanessa Chase.)

For me there are 3 glaring issues:

First issue: this eWire didn’t have to go out on International Women’s Day and talk about men OR AFP could have chosen to send an eWire celebrating women on IWD.

Most of my career as a fundraiser – one who came up through annual giving and events – I’ve needed to be aware of significant days and holidays, and not just the ones I was raised on. Rather, the significant national, religious and special days which are important to all members of a community.

It was only a few weeks ago that women – and many others – attended the Women’s March on Washington. (And many of us participated in towns and cities around the world.) AFP International Headquarters are right there in Virginia, so the issues of women and the fight for fairness should be top of mind.

Second issue: the AFP eWire segmentation was a disservice to all.

When this went down on March 8, I was scrambling to get everything done on my last workday before a long-awaited vacation (I’m flying to see my daughter now). When I saw the eWire email, the article “Why are there so few male fundraisers” was at the VERY bottom. Or at least the one I received.

Some colleagues received the AFP eWireYP, which is segmented for Young Professionals. And on the very day when the whole world was celebrating the contributions of women, these members saw that the first article at the top of the email was Young Professional Spotlight: Thaddeus Teo.

A fine young fundraiser, working at a fantastic nonprofit: United Way of King County (where I worked for a few years). But… you’d think there might be some sensitivity around highlighting a gent on IWD.

Next article was “Why are there so few male fundraisers“.

To recap the differences in segmentations:

Our newsletter (Old Professionals?) is topped with articles like:

Our newsletter had the article “Why are there so few male fundraisers” at the very bottom of the page.

Their newsletter (Young Professionals) had the article about Thaddeus and below that “Why are There so Few Male Fundraisers?”

And our top four articles? One was in the YP eWire, with a different title (Class Action Suit Filed Against PayPal’s Giving Platform) but none of the other articles. (My SFU colleague Rory Green alerted me and then forwarded her eWire.) 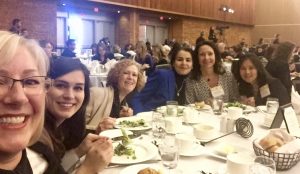 A few members of the SFU major gifts team – most of whom are women (but not all!)

Hey, I like segmentation – where it works. But some of these differences are about age and some are related to experience. You can have a new fundraiser who is 45 years old. And you can have a person under 30 who actually has a breadth of experience. Rory and Vanessa are just two experienced fundraisers I know who live in Vancouver who are under 30.

Third issue: That article, though…

This article, which either has no authorship claims or was written by a collective within AFP’s public affairs office, could have been based on research rather than a survey, opinions and musings. Ostensibly, the article sets about to answer these questions:

Do we need more men? I don’t know – and this article makes no attempt to answer that. You can easily find articles such as: Lack of Women in Top Roles Hinders Nonprofits or Women in Power – or Not So Much: Gender in the Nonprofit Sector.

In addition, the way this article is written feeds into some issues of power and privilege without addressing them – the same issues that some that our nonprofits are fighting against!

The article also approaches gender as binary – and let’s all get woke it just ain’t so any more, no matter your personal views.If you are a fundraiser, I believe you had better be approaching your work and life with an open mind and non-judgmental heart.

If you are a fundraiser, I believe you had better be approaching your work and life with an open mind and non-judgmental heart. @fundraiserbeth

It doesn’t address the issue of feminization of the nonprofit workforce – that is that by having more women in the sector, earning power has been suppressed.

And worst of all, for me, is that the article does not discuss the skills, talents and passion needed for this career. These are what we should be considering in regards to hires, not gender.

This article could have been much stronger. I was sad to see it settled on trite reasoning such as:

I would like to offer an alternative view on this issue.

We need more deeply committed fundraisers who are fired up and ready to challenge the status quo. @fundraiserbeth

Many of us work in areas of justice, dignity and diversity; fairness, equity and equality; and to break down archaic and moribund systems and bureaucracy, to name a few of the hills we battle on. So why did this article, and the thinking behind it, keep us stuck there?

Let’s talk about the need for more committed, career fundraisers and how to get our sector moving toward this goal. Get rid of the interlopers, as my friend and colleague, John Lepp, wrote.

No more fundraisers biding their time until retirement, No more new-to-the-workforce adults becoming fundraisers because it is an easy first job – but they don’t really care and will leave at the first sign of more money. No more unmotivated individuals taking up the positions of others who could and would contribute so much more.

Fundraisers should be dedicated to the mission of the nonprofit where they work. We should be fundraisers with the zeal of disrupters – people who want to challenge the status quo to make what we do in the nonprofit space better.

THIS should be the call of AFP.

To stand for something beyond male/female, beyond old (or experienced)/ young (inexperienced), beyond racial diversity to embracing a spectrum of diversity in our workplaces, boards and donors.

But certainly, on International Women’s Day, AFP should have been celebrating those who make up about 75% of our workforce.

Full disclosure: I am a member of the AFP Canada Foundation for Philanthropy Board – and I’m going to suggest that AFP International Headquarters make a note of this celebratory day holiday every year!

UPDATE: You should also read the statement from AFP.

Other voices: My colleague Vanessa Chase Lockshin also shared her thoughts in this post.