All the gifts my first boss gave me… 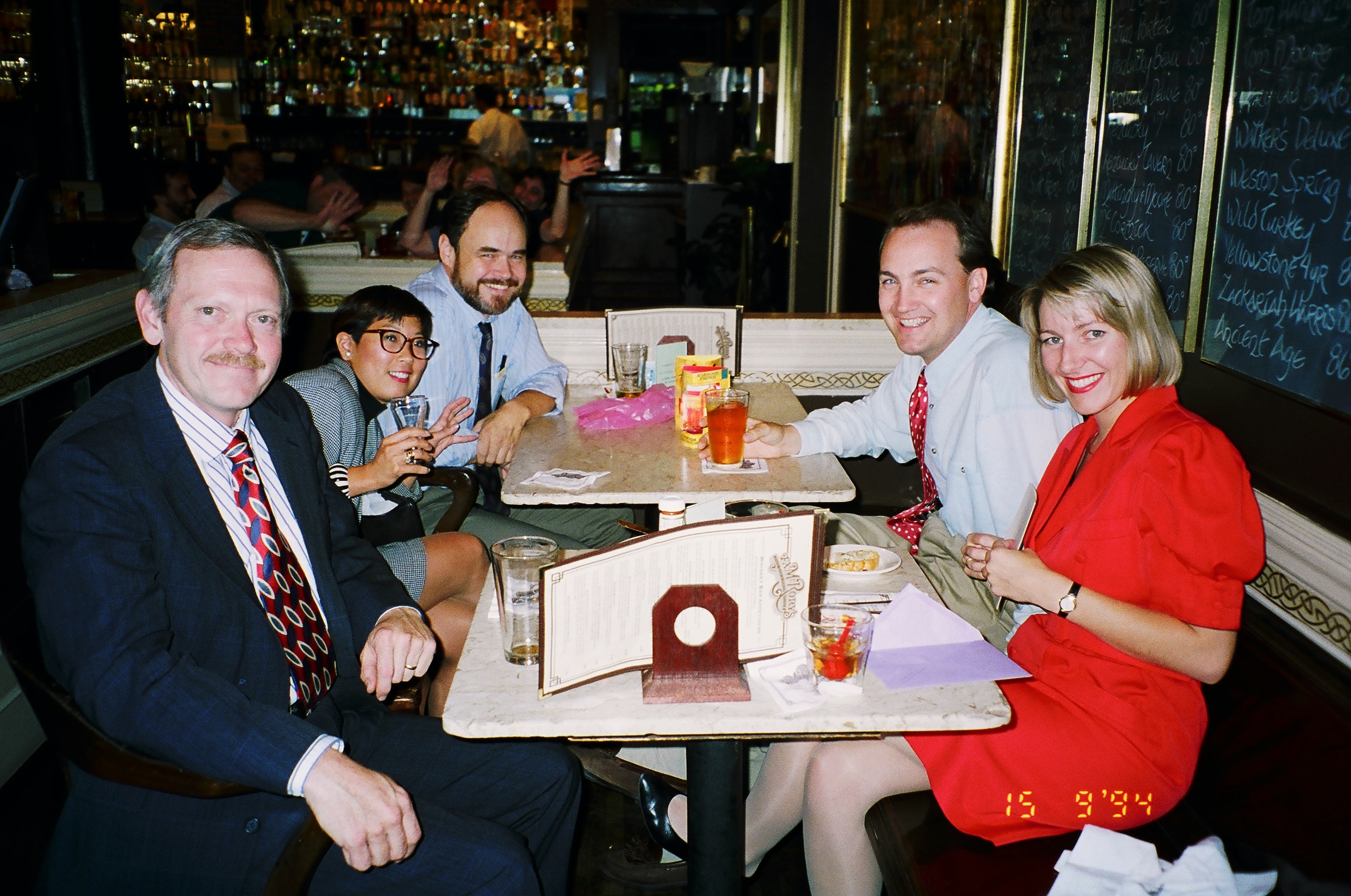 Some pals at my goodbye party leaving Harborview; Cliff is on the left, that’s me on the right.

At times, you only understand how good a thing is when you look back on it.

Such is the case with the boss in my very first job – Cliff Sanderlin.

My first fundraising job was at Harborview Medical Center in Seattle, Washington. What a great mission, what great healing, what changed lives! A Level I trauma center for Washington, Alaska, Montana and Idaho, with heroic stories of healing, Harborview was a part of the University of Washington. They were some of the most dedicated staff – medical staff and non-medical staff – I’ve met. It was a privilege to raise needed funds while there.

And three of us – Cliff, Rebecca Fong and me – were building the fundraising office from the ground up. I was so excited. And I had no idea how it would change my life as I started on a fantastic career journey I’m still on.

I know now that the most important things I got out of my time there were the many gifts that Cliff gave me.

Gift #1 – the opportunity. We often come across this gift in life – a door opened. When we get a gift like this, we always need to make the most of it – take that first step to walk through the door (or even knock on the door to get it opened!). I was intrigued by what fundraisers were doing when I was working at the University of Washington College of Engineering in a secretarial role. Cliff was the Associate Director of Development there – and when he left to take a job at Harborview, I asked if I could become a fundraiser too – I wanted a job there. We talked. He saw something in me that would succeed. I applied and joined the team.

Gift #2 – he built a great team. Cliff looked for someone he had worked with before (Rebecca), and someone new (me!). Cliff considered his strengths, and tapped another colleague to join him. And then he added me to the team. And then, he worked with us to set expectations and help us grow. He made sure there were times of fun along with the hard work. It may have been the ease and challenge of a small shop, but we felt we could do almost anything!

Gift #3 – he trusted the team, he trusted us. There was deep respect and trust between the three of us – Cliff came from a stance of trust. Which made it easier for us to trust him to lead us. We had honest conversations and brainstormed without fear. We tried and failed at a few things, that first year, but we got better and and smarter.

Gift #4 – he believed in me. When Cliff and I sat and chatted after I expressed an interest in the fundraising job, he asked lots of questions. But he also listened to the answers I gave. And then he gave me the gift of a fundraising job and asked me to do the best I could. And I did – as the gift processor, working the direct mail (our first letter was addressed “Dear Friend” as we rushed to get something out just 2 months after we started up the fundraising office – and that never happened again). And I learned about the power of hyper-personalizing letters of gratitude for gifts, adding post-its to letters so Cliff could write specific, meaningful notes beside his signature.

Gift#5 – more responsibility after I proved myself. As I learned the database and got used to gift entry, the thank you letters became more and more tailored (and donors clearly appreciated that). I also learned how to perform pretty good donor research (in the era when the Internet was just a baby). Rebecca and I worked on the successful first direct mail campaign and then we were let loose to plan on our own the Employee Campaign (for which we won a national price from the Association of Healthcare Philanthropy!). Cliff knew we wanted to do more and keep doing great – and he encouraged me to try more and do more.

Gift #6 – solid professional development funds. As we got settled – ordering computers, setting up the database and systems to get going on our first mail campaign – Cliff suggested we look for a conference to attend. The next month we found the Association for Healthcare Philanthropy annual conference and were flying off to Washington, D.C. He also encouraged us to build a library of resources (that’s how you had to do it back in the day!) and to connect with colleagues from around the Seattle area. He was willing to invest in us for knowledge to use then, and for our futures. (And it was at that conference that I discovered that fundraising was truly my calling.)

Gift #7 – he was a willing mentor. Cliff also shared his experiences and expertise. But he didn’t wield them like a bludgeon. He offered it, asked what we thought or wanted to try. Cliff had years under his belt, but never felt set in his ways. He also helped me understand and navigate the personalities in the upper levels of administration. There were many ways that he guided and mentored that I never realized until many years later.

Gift #8 – he gave us leeway to try new projects. Once we had our first direct mail campaign out the door successfully (and it did well with only prospecting and no previous donors to count on), we could look to the next year fundraising plan. And here, Cliff encouraged us to think about new revenue streams, but also how much time and resources we would need. There was pressure to have a gala – which we did the second year and is still going strong! We needed an employee campaign – but one that couldn’t compete with the established United Way employee campaign in the fall. We nailed it and it felt successful from a financial and hospital-wide team building.

Gift #9 – he understood I had a family. I started working at Harborview when my daughter was 5 months old. I was still navigating being a parent and how my husband and I were sharing parenting between our two careers. Cliff understood; he had a family too. But he also knew that sometimes I would have a sick daughter and have to be the one who had to take a sick day. Because his kids were already teenagers, and he reminded me to enjoy each day with my daughter. He told me I would feel the push-pull of family life and work life and that only I could know how to navigate it for me and my family. That was a true gift.

I hope you’ve already had an amazing boss in your career – and that you have an even better boss in your future. These are the gifts that Cliff gave me, and I’ve tried to offer the same gifts when I’ve been fortunate enough to work with a team.

What gifts have your bosses given you?

Extra joy in your inbox

Sign up for weekly updates from me and my fundraising pals